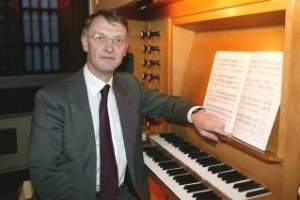 John Keys has been Director of Music at St Mary’s since 1984. In that time the artistic life of the church has bloomed in his hands and continues to evolve.

As well as being responsible for the provision of music for services at St Mary’s, being Artistic Director of the Orchestra of the Restoration and having a heavy teaching load, he is in great demand as accompanist, continuo player and recitalist.

Andrew Abbott studied organ in Birmingham under George Miles at Harborne Parish Church. He played regularly at St. David’s Shenley Green before being appointed assistant organist at St. Martin’s in the Bull Ring while still at school.
During his music degree at Nottingham University he received organ tuition from John Keys and won the University’s Barber Organ Scholarship. After graduating, Andrew was appointed as assistant organist at St. Mary’s. Andrew is well known locally as a recitalist, accompanist and continuo player.

Paul has sustained strong interests in choral and organ music throughout his teaching career, and has been pleased to maintain this at St Mary’s since 1999 alongside his post as Deputy Headmaster at Nottingham High School. Previously he has been in charge of music at Christ Church Highbury (London), All Saints’ Wokingham and Holy Trinity Sunningdale, as well as helping at other churches in Berkshire.

This position is currently vacant.

Going to university in September?

For details of all events at St Mary’s, including concerts performed by the choir visit St Mary’s Church website